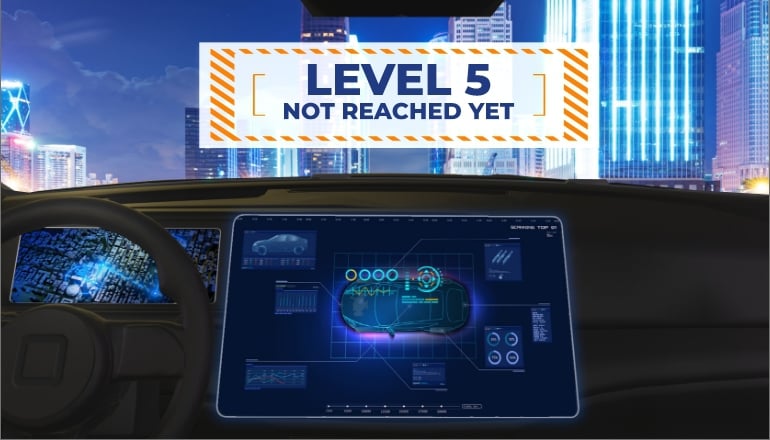 From the Batmobile to Knight Rider’s KITT to the sky cars in the film the Fifth Element, self-driving cars have long been envisioned as the wave of the future. With the rise in popularity of an assortment of automated driving features, it seems that the future is already here.

The autonomous car market is showing rapid growth with no signs of slowing down. With an estimated CAGR of 31.3%, the market is expected to grow from $1.64 billion in 2021 to $11.03 billion in 2028. Countries like Germany and Japan already have a number of conditional automation vehicles on the road (known as Level 3 - see illustration), and South Korea has announced the ambitious goal that 50% of all vehicles produced by 2035 will be fully autonomous.

But is the industry really ready to make the leap to fully autonomous, or to be specific, Level 5, vehicles? While some experts remain confident that we are on the cusp, the consensus seems to be that consumers should not expect to be able to sit back while their car takes them where they want to go for at least another decade. There is a new technology that still needs to be developed along with safety regulations that need to be put in place first.

Where Are We Now?

The automotive industry has certainly come a long way, and many driver-assistance features are now standard in most cars. Despite the seemingly high-tech capabilities of cars today, the majority of cars are actually only at Level 2 in terms of automation. This means that drivers are still very much in control at the wheel, even when using adaptive cruise control or Hyundai’s Highway Driving Assist feature, for example.

While small advances are being made in a few countries, wide-scale adoption of Level 3 autonomy and higher will not be possible without significant action taken by governments and regulators. It is crucial to have safety regulations and strict laws detailing under which conditions autonomous driving is legal and when the driver needs to maintain control of the car.

A look at where the industry stands in terms of Levels 3 and 4 of autonomy will provide some insight into how far the industry has to go to arrive at Level 5.

Level 3 cars offer a limited self-driving experience. This means that under certain very specific conditions, the car can drive itself. The driver, however, must be on constant alert and ready to take back control of the car as soon as the circumstances change. These circumstances include speed as well as road and weather conditions.

So far, only Japan and Germany have Level 3 vehicles on the road. Japan was the first to make this leap, putting the Honda Legend on freeways in 2021. Germany was not far behind, offering Mercedes’ Drive Pilot on certain models of their S-Class and EQS. South Korea plans to roll out a Highway Driving Pilot by the end of 2022 with the Genesis G90. The United States and the United Kingdom are among the other countries that are working to legalize Level 3 autonomy in passenger vehicles.

The existing Level 3 systems are limited in the level of autonomy they can offer. The Mercedes-Benz EQS, for example, can only operate on a highway in daylight, with no precipitation, and at speeds under 37mph. As soon as any of those conditions changes, the driver is alerted by lights on the steering wheel and has only 10 seconds to reassert control over the car.

This shared responsibility and constant transfer between the car to the driver is a significant hurdle for automakers. This challenge is so great that some automakers have decided to consider skipping Level 3 and jump right to Level 4 automation, where the car remains in full control in more complex situations without the driver having to be as alert.

Level 4 automation is an exciting breakthrough in itself. Although it also can only operate in particular situations, the car has full control from start to finish and the driver does not need to be ready to participate at all. If on the off chance, the system fails or cannot handle the situation, it automatically pulls over and comes to a slow stop.

Currently, Level 4 automation is not approved anywhere for general consumer use, but there are a few trials in process in the public transportation and trucking sectors. Waymo One is a taxi service that uses Level 4 autonomous vehicles to provide easy transportation in Phoenix, Arizona and San Francisco, California. Walmart has recently partnered with autonomous technology developer Gatik on a pilot program in which Level 4 trucks are transporting products on a 7-mile route in Bentonville, Arkansas.

So far these programs are seeing success, and while it could be a long time before they are able to operate on a larger scale, OEMs and others in the industry believe that Level 4 vehicles will be available for private use by 2024 or 2025.

The Road to Level 5: Full Autonomy

If Level 3 is already here to some degree (or might be skipped completely) and Level 4 is just a few years away, doesn’t that mean that Level 5 should be available shortly? It’s not that simple. There are both safety-related and technological barriers that may delay the appearance of Level 5 autonomy anytime soon.

While driver-assistance features like automatic emergency braking have reduced reported rear-end collisions by 50%, there is a very long road between ADAS and full vehicle autonomy. Amongst many reasons, the sheer amount of real-time data that a vehicle will need to collect and analyze in split seconds will require significantly more power than is currently available.

The way cars are currently built already requires over 100-150 separate ECUs coupled with specific hardware and reliant on monolithic software. The addition of any new feature or capability means adding another ECU and all of the development, testing, wiring, and costs that go along with it.

Part of the journey towards Level 5 must include a major shift in the underlying architecture of the vehicle from the traditional E/E layout to next-gen E/E architectures, like zonal architecture, in which the use of centralized servers and zonal gateways will reduce the number of ECUs necessary to offer multiple features.

Although these architectures will require fewer ECUs, the ECUs themselves will be more powerful with stronger computing power to support Service-Oriented Architecture (SOA). Together with a fast hardware-based routing solution to reduce communication latency, the vehicle will be able to handle the complex functionalities required for Level 5 autonomous driving.

So What Happens Next?

While the thought of fully autonomous cars is exciting for automakers and consumers alike, it is imperative that the infrastructure is in place to ensure that vehicles will be safe and able to sustain the advanced technology needed to make them operate properly.

This can potentially mean waiting probably at least a decade if not more, as well as investments of millions of dollars in development and regulatory costs. In the meantime, the time is ripe for OEMs to focus on the transition to the software-defined vehicle and improving the communication capabilities both inside vehicles and between vehicles so that the technological supports will be in place when the regulatory environment is ready.